Can This ‘Hazmat Suit For Flying’ Save Air Travel? 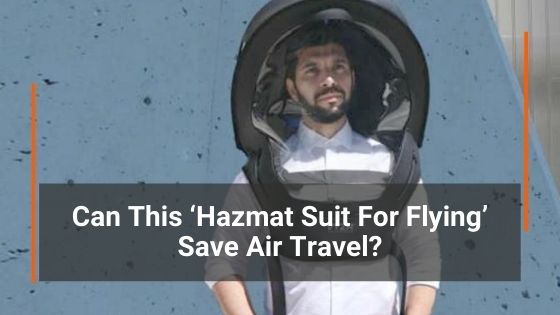 IS THIS THE NEXT-LEVEL PPE YOU NEED TO FEEL SAFE ON A FLIGHT?

It turns out that Naomi Campbell was tapping into a very real consumer sentiment back in March when she posted a photo on Instagram of herself at the airport wearing a white hazmat suit, goggles, face mask, and latex gloves.

As the air travel industry struggles through its gradual, faltering recovery during the pandemic, it has become painfully clear that millions of Americans share the model’s anxiety about flying when armed only with a face mask, hand sanitizer, and crossed fingers.

This might explain how a Jetson-Esque item of next-level Personal Protective Equipment (PPE) has so quickly caught the fancy of anxious travelers.

In only a dozen or weeks or so, a Canadian startup has sold tens of thousands of its futuristic BioVYZR online while its YouTube promo video racked up 2.2 million views. Meanwhile, the company has raised over $567,000 on the crowdfunding site Indiegogo as it took its idea from prototype to product.

Don’t let the space-chic vibe fool you; this is no gimmick. The BioVYZR is a legit consumer-grade Powered Air Purifying Respirator (PAPR) using hospital-grade air-purifying technology similar to the respirators worn by frontline healthcare workers.

The business has taken flight at a dizzying speed. Based in Toronto, Yezin Al-Qaysi launched VYZR Technologies only four months ago in response to what he saw as a dearth of good PPE options for a wide variety of people during the global pandemic.

Admittedly, he had a head start on bringing his idea to market. “The BioVYZR was based on an existing design that I developed at my previous company as a sun visor to provide hands-free shade from the sun,”.

“And we used that as a starting point to create something similar, but yet entirely different.”

With a small staff of about 10 in-house employees plus a wider network of manufacturing partners, distributors, and consultants, Al-Qaysi has been able to get the BioVYZR to market very quickly. Customers who pre-ordered visors at $249 apiece will receive them between the end of July and early August. “Newer customers should be getting them in the second half of August,” he says.

While online commenters have dubbed the BioVYZR a “hazmat suit for flying,” Al-Qaysi says the visor was not specifically conceived for travel. “For us, it was all about essential workers and frontline staff, and the people who were really facing this every single day.” By far, the fledgling company’s biggest chunk of business to date has been from large institutions such as schools, dental clinics, hospitals, meatpacking plants, retail establishments, governments, and companies that supply governments.

Even so, it’s easy to see why people love this idea for air travel. Worn over the head and shoulders, the BioVYZR resembles an astronaut suit, with its bubble-like hood and large anti-fogging face shield. Designed to filter your personal air and shield your personal space, the fitted, one-size-fits-all neoprene vest provides a 360-degree seal thanks to adjustable side straps.

Al-Qaysi and his team have been nimble in making improvements as they receive feedback from interested customers. “We started off with a very specific scope that this was going to be a shield. But as we put it out there on Indiegogo, we heard from doctors and dentists who told us what would make their lives easier,” he says.

Such feedback is the reason the BioVYZR’s air purification system now has a blower to propel the flow of filtered air into the visor while maintaining an airtight seal around the air intake. The blower makes it “feel like there’s a constant gentle breeze on your face” and “reduces the heat deflection from the face shield, eliminates fogging, and prevents any particulates from reaching your face,” according to the product specs. There is a built-in rechargeable power supply for the blower, and there’s even a USB port for convenience.
“We did a lot of research on this,” says Al-Qaysi. “We made sure that the battery was well below the carry-on limits on planes, which is around 20,000 mAh. Ours is about 10,000 mAh, which is the size of a standard power bank.”

While noting that the BioVYZR is not yet approved by the FAA, Al-Qaysi says he’s hopeful the travel industry as a whole will be open to the idea. “The TSA hasn’t seen it. Airlines will start to see this product in the coming weeks for the first time, and we don’t know how they’re going to react.”

Al-Qaysi says he would welcome a dialogue with airlines about any safety modifications that needed to be made. For example, he says they could create a solution that allows the wearer to open the visor quickly in an in-flight emergency should oxygen masks dropdown.

“The key here is to open up a conversation about how we’re going to get back to a little bit of normal, get the economy going, get the airlines going again before this damage becomes permanent, and large airlines have to shut down,” says Al-Qaysi.