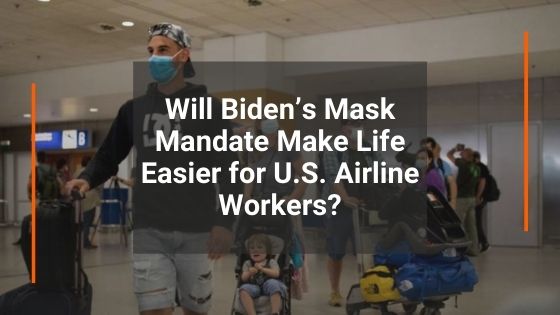 PRESIDENT JOSEPH BIDEN SIGNED AN EXECUTIVE ORDER MANDATING THE USE OF FACIAL COVERINGS ON ALL PUBLIC TRANSPORTATION, INCLUDING AIRCRAFT, FOR THE NEXT 100 DAYS. THIS ORDER IS IN STARK CONTRAST TO THE TRUMP ADMINISTRATION’S TRANSPORTATION DEPARTMENT, WHICH DEMURRED ON A MANDATE AND LEFT THE MATTER UP TO AIRLINES TO REQUIRE AND ENFORCE.

In a word, yes. The executive order, signed January 21, requires the Transportation Secretary to implement mask rules, working with the heads of the FAA, Transportation Security Administration, and Department of Homeland Security. The order mandates the use of masks in airports, on commercial aircraft, and on all other forms of public transportation.

Unions representing airline employees welcomed the news. “We applaud [President Biden’s] mask mandate for interstate travel/aviation,” the Association of Flight Attendants said on Twitter. “It is fantastic to have this leadership we’ve been calling for a year.”

Biden’s Transportation Secretary nominee Pete Buttigieg stressed the importance of a mask mandate in his Senate confirmation hearing today. “Safety is the foundation of this department’s mission,” he said in his statement to the Senate Commerce Committee. “That takes on a new meaning in this pandemic.”

This is the crux of the problem. When the Centers for Disease Control and Protection (CDC) last year issued guidance that facial coverings can help slow the spread of Covid, airlines began requiring passengers to wear masks on board and in gate areas. Many airports quickly followed suit. But enforcement was left up to the airlines.

A union representative told Airline Weekly at the time, “It’s like making us the police without the force of law.” For other transgressions, such as disorderly conduct, airlines can call for law enforcement to meet the aircraft at the gate to arrest the offender. They did not have that recourse for mask scofflaws.

Unions have said this could all be rectified with a mask mandate, laying out the requirements in black and white. But the Trump administration’s Transportation Department remained deaf to their pleas.

Airlines did take matters into their own hands, adding hundreds of passengers to no-fly lists for not complying.