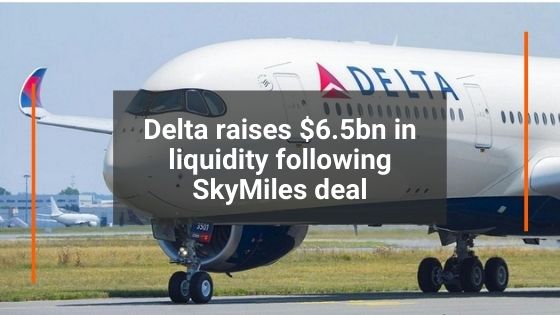 DELTA AIRLINES HAS CONFIRMED IT WILL BORROW $6.5 BILLION BACKED BY ITS FREQUENT-FLYER PROGRAM, SKYMILES.

The carrier thus becomes the United States-based carrier to tap its loyalty platform to shore up liquidity during the Covid-19 crisis.

The airline plans to sell senior secured notes and enter into a new term loan, both backed by its loyalty program.

SkyMiles will lend the net proceeds of the bond offering to Delta, although a portion will go to a reserve account.

Delta said last week that it had about $16 billion in cash at the end of June and that it was burning around $27 million a day.

United Airlines announced plans in June to use its frequent-flyer program, MileagePlus, to back a $5 billion loan.

American Airlines has said it also plans to use its program to as collateral for a nearly $5 billion federal loan.

Delta explained in a statement it would create SkyMiles IP, a newly formed Cayman Islands exempted company incorporated with limited liability and an indirect wholly-owned subsidiary to facilitate the deal.

The Atlanta-based airline said it expects capacity to be down 60 percent in September compared with the same month last year.

Harder-hit international flying will be cut by 80 percent, with domestic routes down by half.