Airlines take different routes to building capacity back up 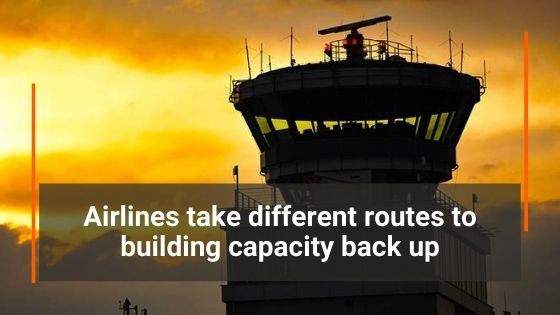 IN AUGUST, U.S. AIRLINES ARE SCHEDULED TO FLY 58% OF THE CAPACITY THEY OFFERED A YEAR EARLIER, ACCORDING TO THE FLIGHT DATA PROVIDER OAG. THAT REPRESENTS A LARGE UPTICK FROM THE SECOND QUARTER WHEN CAPACITY AT DELTA AND UNITED WAS DOWN MORE THAN 85%.

The process of building and adjusting networks is especially challenging during the pandemic, as airlines must deal with a volatile demand environment.

“There’s virtually no good news for the airlines here,” said Peter Belobaba, the airline industry program director at the Massachusetts Institute of Technology. “The best-case scenario is that recovery is going to be measured in years, not months.”

Under such conditions, Belobaba said, American, Delta, and United will surely focus buildups on reinforcing connectivity from their hubs, which will help them avoid dropping too many small destinations from their route maps.

“When you are down to 40% of your previous capacity, I would think some of the smaller points will lose service,” Belobaba said. “But the fundamental strength of hub-and-spoke networks is you don’t have to drop a specific spoke. You can just serve it once a day.”

Conversely, point-to-point discount carriers such as Southwest, Allegiant, and Frontier are taking advantage of their nimbler business models to move capacity around quickly, chasing demand as they grow their networks. OAG data showed that as of July 22, Southwest was scheduled to fly 80% of its August 2019 seat capacity next month. Allegiant was showing a capacity increase of 5%. Frontier planned to offer 72% of its August 2019 seat count.

In contrast, Delta was slated to fly 51% of its August 2019 capacity. The figure was 44% for United and 57% for American Airlines.

Those schedules, however, are far from static. In a post on his Cranky Flier blog, aviation analyst Brett Snyder called attention to route changes Southwest made during the third week of July to take advantage of what he called “pop-up” demand. The carrier added 10 routes, with an emphasis on St. Louis, that were set to begin July 26. Such last-second additions make more sense now, Snyder said since flyers are booking later.

Still, even within the various commercial models, airlines are taking sharply different approaches to manage schedules as the pandemic plays out.

A domestic route map presented by United during a Travel Weekly webinar.
During an earnings call last week, United chief commercial officer Andrew Nocella discussed the carrier’s intention to be the most capacity-disciplined of all the U.S. airlines. United, he said, won’t be chasing market share during the pandemic, instead, focusing on reducing cash burn.

“American has felt a sense of commitment to fulfill the critical role we play in the national mobility infrastructure,”

One reality all carriers are dealing with is the near absence of business travel, which is forcing network carriers to tilt toward the type of leisure routes that have long been the bread and butter of their discount rivals. But even scheduling for that type of service comes with risks. In early June, for example, American announced that it would leverage its Charlotte and Dallas hubs to increase service to Gulf Coast beach destinations. A couple of weeks later, the surge in COVID cases in the Sun Belt region altered the playing field.

Some airlines are chasing demand in more out-of-the-box fashions. For Q2, United reported a 36.3% increase in cargo revenue, and it said cargo opportunities were a key factor in its decision to launch a three-times-weekly service from Chicago O’Hare to Tel Aviv in October.

Carriers have also announced strategic consolidations and partnerships during the pandemic. American signaled in early July that it will let go of Los Angeles as an international hub, retrenching in Dallas for transpacific service. In October, JetBlue will exit Long Beach and concentrate its Los Angeles-area service in LAX. In mid-July, the two airlines also announced plans for an expansive codeshare deal concentrated on the East Coast.

Mike Sloan, a vice president at PROS, a leading revenue management software provider for the industry, said he expects the crisis to lead to more cooperation among carriers.
“The closer that airlines can learn to work together, finding niches and less overlap, the more advantageous it is going to be for them,” he said.