American Airlines to Make DFW a Hub for Flights to Asia 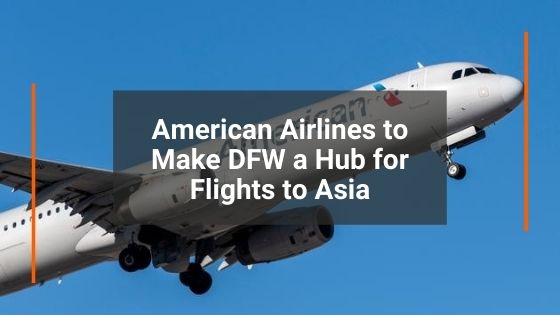 SAYING IT WOULD BE MORE PROFITABLE TO FLY TO ASIA-PACIFIC OF ITS HOME BASE AT DALLAS-FORT WORTH INTERNATIONAL AIRPORT, AMERICAN AIRLINES IS SHIFTING ITS BUSINESS FROM LOS ANGELES INTERNATIONAL.

According to The Dallas Morning News, American Airlines made the decision despite knowing that, logistically, Dallas is not exactly conducive to flying to markets such as Hong Kong, Beijing, Tokyo, Seoul, and even Auckland, New Zealand.

“Dallas certainly doesn’t have the best geography for an Asian hub,” said Brian Znotins, American’s vice president of network and schedule planning. “But it does have some advantages in connecting people in the Southeast [United States] to Asia.”

The Morning News noted that American’s emphasis on its DFW hub started even before the coronavirus pandemic decimated air travel in the U.S. About 26 percent of all of American’s traffic goes through DFW, almost twice as much as what goes through its next biggest hub in Charlotte, N.C.

“What American is probably thinking is to capitalize on the huge amount of connectivity that they get here,” said Nico Mirman, a Dallas-based aviation consultant with Ailevon Pacific. “That’s something Los Angeles cannot offer for them.”

“In a lot of ways, this is more about reducing L.A. than boosting DFW,” “Every Asian carrier feels the need to serve L.A. and that creates overcapacity. Even going into the pandemic, we were losing money on those L.A. flights.”