Delta will launch a brand-new service to Croatia this summer 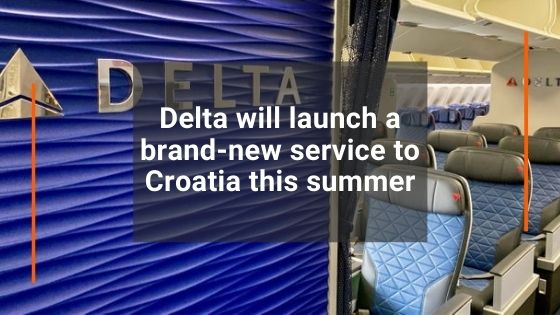 In just under two months, the Atlanta-based carrier will launch its first-ever nonstop service to Dubrovnik, Croatia (DBV). Delta’s four-weekly flights from New York-JFK will take off on July 2, providing flyers with one-stop itineraries from 44 U.S. cities. Seasonal service is scheduled to end on Oct. 3, though it could get extended depending on demand and other factors.

While Delta currently has its legacy 767 jets slated to operate the Dubrovnik route, it’s possible that some frequencies will get upgraded to the newly retrofitted Boeing widebodies that sport a dedicated premium economy cabin.

Croatia reopened to select travelers at the beginning of April. In addition to providing proof of accommodation paid in full in advance of arrival, tourists must also present either a negative COVID-19 test taken less than 48 hours before arrival, a vaccination certificate showing fully vaccinated status or a certificate confirming recovery from a recent COVID-19 infection.

Of course, entry policies are always subject to change between now and July 2, and the U.S. Embassy in Croatia notes that the Croatian Border Police have final authority regarding entry into Croatia.

United’s three-weekly Newark (EWR) to Dubrovnik flights launch on July 8 and run through Oct. 3 aboard a 214-seat Boeing 767-300ER.

Delta will start flying to Croatia on July 2 (Photo by Zach Griff/The Points Guy)
Interestingly, American Airlines operated nonstop service from Philadelphia (PHL) to DBV in the summer of 2019. The 4,606-mile flight was operated 106 times that summer by the now-retired 209-seat Boeing 767-300, per Cirium timetables.

In July 2020, at the height of the pandemic, AA announced that it would permanently suspend service to Dubrovnik, though it’s possible that could change, especially now that Delta and United are giving Croatia a try.

Related: Where you can go if you’re vaccinated

Delta will beat United to becoming the first U.S. airline to start serving Croatia this summer, but it may need to work harder than UA to secure new bookings. With less than two months of lead time, Delta’s success will seemingly be tied to how much last-minute demand it can drum up.

In a recent meeting with American Airlines’ executives, J.P. Morgan airline analyst Jamie Baker noted that despite Europe’s reopening on the horizon, airlines may not be able to make a play for summer travel there, due to crew scheduling requirements and the traditional passenger booking windows.

Of course, this summer could be different thanks to the pent-up demand from pandemic-weary travelers looking for an international, outdoor-friendly escape.

In fact, Delta’s convinced that flyers are ready for more passport stamps. “Customers are at the center of everything we do, including where we fly, and the addition of a new outdoor-friendly destination is another sign of the surge in demand we’re seeing,” Joe Esposito, Delta senior vice president of network planning, said in a statement.

Croatia joins recently announced new and expanded Delta routes to Greece and Iceland from multiple gateways across the U.S. (United is also adding new routes to the aforementioned countries.)

For those looking to stay within the U.S. this summer, Delta has significantly expanded flights to Alaska, mountain destinations in the West and beaches in the south.