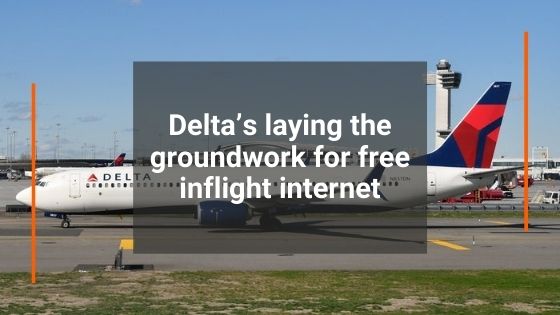 IN EARLY 2019, DELTA CEO ED BASTIAN SHARED A GOAL FOR THE AIRLINE TO OFFER FREE, FAST WI-FI ON ITS FLIGHTS WITHIN A YEAR OR TWO.

Carriers have obviously had to make some adjustments following the COVID-19 pandemic, but free connectivity still seems like a top priority for Delta, with the carrier inching closer to its objective with a big shift announced today.

In a notable news release Tuesday morning, Delta detailed plans to begin a shift away from Gogo Wi-Fi to instead join forces with rival Viasat.

As part of the connectivity tweak, Delta will begin offering Viasat service on a handful of narrow-body aircraft as soon as this summer, including new and retrofitted Airbus A321s, Boeing 737-900ERs, and Boeing 757-200s. As of now, more than 300 Delta planes are slated to get the Viasat boost.

What remains unclear is whether or not the carrier’s current free Wi-Fi partnership with T-Mobile will carry over to Viasat — a Delta spokesperson was unable to confirm whether or not T-Mobile customers will be able to score free Wi-Fi on Viasat-equipped planes.

JetBlue already offers free Viasat connectivity on all of its aircraft, and Viasat service can also be found on select aircraft operated by other top carriers, including American Airlines and United.

While 300 planes represents less than half of Delta’s fleet, it’s likely that the airline will continue to bring more aircraft onboard as Viasat’s technology evolves.

ViaSat-3, the company’s next-generation satellite network, could launch as soon as this year, adding connectivity over much of the globe while offering nearly eight times more capacity — good news for anyone hoping to stream content from 30,000 feet and surf the web just as they do at home.

While we’re unlikely to see Delta offer unlimited free Wi-Fi across its fleet immediately, this latest move is clearly a step in the right direction. Unlike Gogo, Viasat controls the entire experience, including the satellite network, making it possible to bring costs in line with what Delta may need in order to make inflight Wi-Fi completely free.