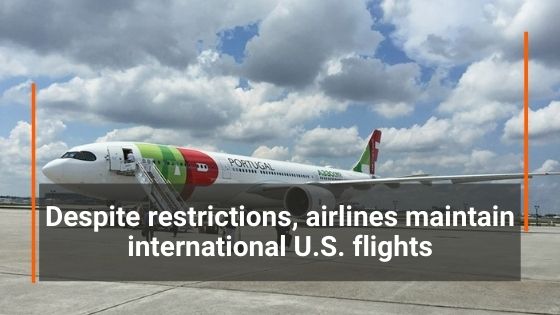 LOAD FACTORS ON THE CARRIER’S NORTH AMERICAN ROUTES RIGHT NOW ARE IN THE 50%-TO-60% RANGE.
“AS LONG AS YOU COVER THE VARIABLE COSTS, IT IS WORTH PUTTING THE AIRCRAFT UP IN THE AIR,” PANEIRO SAID. “A LOAD FACTOR OF 50% TO 60% IS NOT AS PROFITABLE AS IT WAS BEFORE, BUT IT’S WORTH PUTTING UP WITH THOSE LOADS, AS OPPOSED TO PUTTING PLANES ON THE GROUND.”

In mid-August, TAP Air Portugal announced plans to return to Chicago, San Francisco, and New York JFK by October, meaning the carrier would be serving all seven of its pre-pandemic U.S. gateways.

“There is a lot of uncertainty out there. We don’t know anything about an eventual second wave,” Carlos Paneiro, TAP’s vice president of sales for the Americas region, explained a few days later. “But our plan is to keep growing in the USA as long as demand allows us to do it.”

Restrictions imposed by other countries continue to steeply curtail the ability of Americans to travel abroad, while U.S.-imposed restrictions block most incoming traffic from the EU, China, and Brazil as well as incoming leisure traffic from Canada and Mexico. Nevertheless, in August TAP was one of more than 70 airlines, including more than 60 foreign-based carriers, that offered at least some level of international service from the U.S, according to the flight data provider OAG.

Overall, airlines were slated to offer 3.2 million seats in August on international flights from the U.S. That’s down more than 77% from last year. But with international travel off-limits in so many cases, and with relatively few people interested in traveling abroad these days in any case, it’s reasonable to wonder how, or if, airlines are filling the seats.

“There are essential working communities and groups that are allowed to travel,” said OAG analyst John Grant. “Government workers. People in the healthcare sector. Diplomats. And a lot of it is taking as much cargo as you possibly can.”

At Etihad, which is now serving three of its four pre-pandemic U.S. destinations, some traffic continues to come from re-patriations, vice president for the Americas Vincent Frascogna said.

Business traffic was very much in mind for Qatar when it decided to resume service to Houston beginning Sept. 2 with three weekly flights, Odone said. He added, though, that the friends-and-relatives market remains Qatar’s main source of traffic. The nation of Qatar is closed to tourists, but flyers are connecting through Doha to other parts of the Middle East as well as to East Africa and, increasingly, to Eastern Europe.

“Mainly it’s migrant and family traffic that we have been taking,” said Paneiro.
The carrier’s vice president for the Americas speaks about its U.S. flying, the Wellness Ambassador program, and about its overall prospects during the Covid-19 pandemic.

As of Sept. 2, Qatar will be flying to eight of the 10 U.S. gateways it served prior to the start of the pandemic.

Overall, many of the large global carriers continue to be the foreign airlines that are doing the most flying to and from the U.S. British Airways, Lufthansa, KLM, Aeromexico, Turkish, Qatar, Air France, and Air Canada are all in the top 10 in terms of seats offered this month, according to OAG.

Leading the way, though, is discount Mexican carrier Volaris, which has always focused on the family-and-friends travel market. Volaris’ scheduled U.S. seat offering this month was down 33.5% year over year as of Aug. 12. By comparison, KLM’s scheduled U.S. flying was down 43%, Qatar’s was down 47%, Aeromexico’s was down 68%, Lufthansa’s was down 81%, British Airways’ was down 82% and Air Canada’s was down 94%.
The drastic cutback by Air Canada isn’t unusual. Indeed, more than 30 foreign carriers that flew to the U.S. last August aren’t flying here this year. And others have made similarly large cuts.

One of those is Singapore Airlines, which currently flies just three times weekly from the U.S. on one route, Los Angeles-Singapore. Prior to the pandemic, Singapore flew eight U.S. routes, most of them daily. But Singapore remains closed to tourists and requires even citizens to quarantine for two weeks upon arrival. Further, the city-state continues to prohibit its national airline from booking U.S. customers for connecting itineraries beyond Singapore.

“Obviously, our priority is to reinstate as much of our network as is possible. That is going to depend on the actions of the Singapore government, as far as opening borders,” spokesman James Boyd said.
Still, even with border restrictions dotting the map, carriers like Qatar and TAP continue to optimistically rebuild their international networks. After the Sept. 2 Houston reintroduction, Qatar plans to resume Doha-Philadelphia service on Sept. 15, leaving it with 56 weekly U.S. frequencies, down from 77 pre-pandemic, though some flights are on smaller aircraft.

Qatar’s approach, which has included more flying in general than other global carriers throughout the pandemic, has OAG’s Grant scratching his head.

“I have been at a loss to see how this has been an effective strategy for them,” he said.
But Qatar’s Odone asserts that between passenger and cargo traffic, the U.S. flights are moneymakers.
“The flights are reviewed twice a week in terms of whether they are cash positive or cash negative,” he said. “From the Americas, we’ve never had a problem.”

TAP, meanwhile, had planned a combined 82 weekly August frequencies to the U.S. and Canada prior to the pandemic. With the addition of New York, San Francisco, and Chicago in October, the carrier could bring its actual frequencies as high as 45, Paneiro said. That number includes a new, thrice-weekly Boston-Azores route TAP launched in July to cater to the friends-and-relatives market.