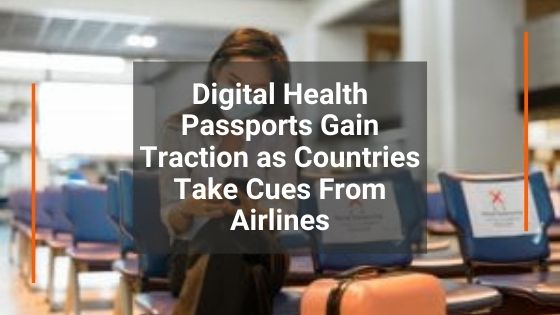 A GROWING NUMBER OF GOVERNMENTS ARE TRIALING DIGITAL HEALTH PASSPORTS, OFFERING A GLIMMER OF HOPE THAT MORE COUNTRIES WILL REOPEN THEIR BORDERS BY THE END OF THIS YEAR.

So far, it’s the airlines that have mostly driven a staggering global adoption, but now one airport technology company has launched a new framework, called Health Protect, for airlines and governments, allowing them to integrate multiple passports, and specify which Covid-19 test results or vaccinations are permitted.

Even Australia, one of the most shielded countries, has successfully tested the Health Protect scheme, developed by airport technology provider SITA, paving the way for more flights to return.

The United Arab Emirates has also piloted Health Protect, opting for the SimplyGo app on flights to Germany and Estonia, with multiple carriers participating. In addition, Milan Malpensa Airport will soon enter a pilot phase.

And on the other side of the world, Panama has signed on with its national carrier Copa Airlines to trial the International Air Transport Association’s (IATA) Travel Pass platform in March.

“Through its integration with different stakeholders, [Travel Pass] will allow passengers to comply with our health requirements, thus restoring confidence in travel and tourism, important pillars for the country’s economic recovery,” said Ivan Eskildsen, administrator of the Panama Tourism Authority, in a statement.

Aruba became the first national government to sign on to a platform in December. It opted for CommonPass in addition to its locally-developed platform, the Aruba Health App.

SITA said it can bridge the gap between passport providers and aviation and border processes by incorporating Advance Passenger Processing, which is connected to 600 airlines

“Where health passports struggle is: how do they integrate with the airline and order processes,” said Jeremy Springall, vice president of border management at SITA. “How does a government know the health passport is valid, and ideally how do they know that before someone travels.”

Springall said that countries that want to open their borders in a safe way will not want long queues where each passenger needs to have the validity of their health passport verified. “If I’m an airline, with 10 different passport schemes, how can I make them all work?” he added.

The increased buy-in of digital passports from governments comes on the back of airline tests. For example, Panama’s involvement comes hand-in-hand with the participation of Copa, whose success relies on its ability to transit customers over what it calls the “Hub of the Americas” at Panama City’s Tocumen Airport. One could say that as goes Copa, so goes travel to Panama.

The Star Alliance carrier suspended all flights in June and July as the coronavirus pandemic took a steep toll in Latin America. Copa, unlike its regional peers, has no domestic market so to speak of leaving it at the mercy of national border restrictions that all but shut down travel. The airline restarted flights in August but, as of February, is flying only about 40 percent of what it flew a year ago before Covid-19 hit, according to Cirium schedules.

“An international standard solution for digital health passports … holds the key to the safe restart of the travel and tourism industry,” said Dan Gunn, senior vice president of operations at Copa, in a statement.

The airline is not alone in seeing digital health passports as key to reopening international travel. On Wednesday, American Airlines expanded acceptance of the VeriFLY health passport app to most of its international flyers. Travelers can use it for flights to eight foreign countries, including Canada, Colombia, Jamaica, and the UK, as well as for all flights to the U.S. The app was previously only available on select flights to and from Miami.

In Australia, the government is working with SITA, as well as airlines and airports, to support the implementation of enhanced border controls. Springall said Qantas was “clearly a stakeholder,” but would not comment on the airline’s specific plans in light of CEO Alan Joyce’s calls for only vaccinated passengers to be permitted to enter.

SITA supported Australia restricting entry into the country earlier during the pandemic using its technology, said Springall. Now, it will help the country open back up, and it is already powering Australia’s declaration system for those limited numbers of inbound flights. “The plans for Australia are still very much underway, so I can’t say too much more at this stage,” he said.

The U.S., for its part, has not officially recognized any digital health passport despite mandating a negative Covid-19 test for all arriving flyers from January 26.

SITA’s Springall believes more countries will start to adopt “various flavors” of digital health passports, giving flexibility to travelers. And they will be around for the long term, too.

“I don’t see governments opening back up purely on a vaccination program. I think testing will still be required for the next few years,” he said.