How Will the Incoming Administration Affect the Travel Industry 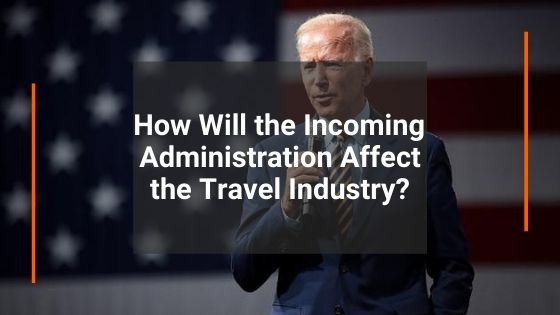 JOSEPH R. BIDEN JR. TOOK OFFICE AS PRESIDENT OF THE UNITED STATES AND, IN THE PROCESS, HE WILL SHIFT THE POLITICAL POWER IN THE COUNTRY FROM REPUBLICANS TO DEMOCRATS IN BOTH CONGRESS AND THE WHITE HOUSE. WHAT WILL THIS MEAN FOR THE TRAVEL INDUSTRY? RIGHT AT THE GET-GO, THERE WILL BE CHANGES, MANY OF WHICH HAVE BEEN PRAISED BY TRAVEL INDUSTRY LEADERS.

During his campaign for president and after winning the November 3, 2020, election, Biden has indicated that he intends to do things differently than his predecessor.

The package calls for $20 billion for a national vaccination program and $15 billion for a new grant program for small business owners separate from the existing Paycheck Protection Program. There is also $35 billion for investment in some state, local, tribal and non-profit financing programs that provide low-interest loans as well as venture capital for entrepreneurs.

“We welcome and wholeheartedly support the provisions of President-elect Biden’s COVID-19 relief proposal that will help spur the travel industry’s recovery and provide support to ASTA members, employees, and independent contractors,” said Eben Peck, executive vice president advocacy for the American Society of Travel Advisors (ASTA). “That said, this is just the beginning of the process and we are working with allies in Congress to build on these proposals and provide additional support for our members, including targeted funding for travel businesses and new long-term loan programs for hard-hit businesses along the lines of last year’s RESTART Act.”

“Accelerating the distribution of vaccines is the key to getting travel back to normal, and we applaud President-elect Biden’s emphasis on a robust federal leadership role to get as many people vaccinated as quickly as possible,” said U.S. Travel President and CEO Roger Dow in a statement.

President-elect Biden’s incoming chief of staff Ron Klain revealed a slate of executive orders for Biden’s first day in office. According to Klain, Biden will sign an order that requires masks on federal property and for interstate travel, a move many members of the travel industry have praised.

Biden has also indicated that part of his inaugural address will be used to encourage Americans to commit to wearing masks for 100 days to slow the spread of COVID-19 and help bring the pandemic under control.

The current Trump administration announced a lifting of travel restrictions from the U.K., the EU, and Brazil. However, President-elect Biden plans to block this move.

The travel restrictions were set to be lifted on January 26, 2021, six days after Biden takes office as President and after President Trump has left Washington.

“On the advice of our medical team, the administration does not intend to lift these restrictions on 1/26,” Psaki posted on Twitter. “In fact, we plan to strengthen public health measures around international travel in order to further mitigate the spread of Covid-19.”

Another executive order that will come on Biden’s first day in the office is the reversal of an executive order by President Trump that banned travelers from seven Muslim-majority nations from coming to the U.S. The order was met with widespread protest early on in the Trump administration.

Klain included the reversing of the ban in the list of executive orders Biden plans to sign on his first day in office.

President Barack Obama made travel to Cuba a lot easier during his administration, rules that were largely revoked by the Trump administration. Now that the incoming Biden administration is moving into the White House, travel advisors are hoping that these restrictions, like others, will also be overturned.

ASTA believes that at least some of the current restrictions will be eliminated. “Whether that exactly matches the Obama administration’s policy or something in between remains to be seen, as does the timing of such changes with everything else that’s going to be on the incoming administration’s plate come January,” Peck said.

“Biden said that he would go back to the thinking of the Obama administration, and we’re hoping he’s going to remember that,” Peggy Goldman, owner of InsightCuba, said.

Not everything coming along with the Biden administration will be a win for the industry. ASTA was hoping to help travel advisors with liability waivers shielding them from lawsuits for selling travel during the COVID-19 pandemic, but Peck noted that securing the waivers will be trickier with the new Biden administration and democratic control of the House and Senate.

“We don’t want our members to have any legal exposure for sending folks on the road,” he said.

One of ASTA’s biggest achievements was winning the fight over the Department of Labor’s ‘Blacklist’ Rule. The association worries that the future Biden administration may overturn this significant achievement. ASTA is currently monitoring the situation.

ASTA fought for travel advisors’ removal from new overtime rules that were issued in May of 2016. They finally won the battle in 2020.

“We commend the Department of Labor for recognizing that travel advisors frequently work irregular hours to help clients facing travel disruptions, as seen most recently during the COVID-19 crisis, and that travel agencies should have the same access to this exemption from the overtime rules as any other retail business,” said ASTA president and CEO Zane Kerby at the time. “In addition, we are incredibly grateful to Congressman Rooney, Congresswoman Titus, and other legislators who have taken up our cause over the past few years. Once the COVID crisis passes, our industry will be in a better position to serve clients thanks to this change.”

Something that continues to resurface is the proposal of a travel tax credit. It was first mentioned back in June and circulated Congress and the White House as the “Explore America” Tax Credit, a proposal that would give a $4,000 tax break to families for vacation expenses at hotels, theme parks, and other tourism businesses through the end of 2021.

The travel industry has continued to rally for the proposal, but there has been little movement on the issue since the original negotiations for a second stimulus package stalled in Congress.

“We’ve proposed a tax credit for travel, and we want to show people that it’s addictive because when people travel, they spend money and they create jobs,” said Dow. “We think it’s one of the easiest ways to get travel moving again.”