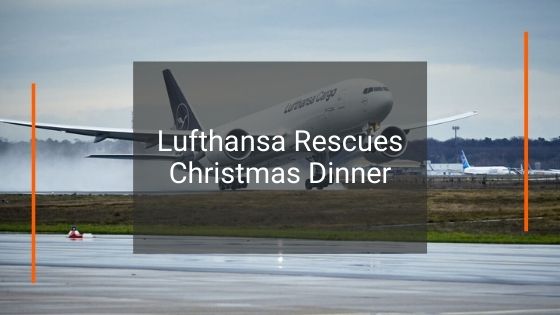 Travelers to and from the United Kingdom have had a tough week. At the weekend, countries began to block travel from the island as concerns rose around a new strain of the COVID-19 virus. However, this didn’t just affect passengers. Freight is facing severe disruption as a critical corridor between the UK and Europe, the English Channel, was closed.

Lufthansa to the rescue

As industry bodies anticipate impending food shortages right as the Christmas break begins, Lufthansa has stepped in to try and save Christmas dinner. At 13:34, one of its Boeing 777 freighters, D-ALFH, departed its Frankfurt Airport hub.

The aircraft was loaded with 80 tonnes of fruit and vegetables bound for UK dinner tables, including lettuce, cauliflower, broccoli, and citrus fruits. While this flight is currently a one-off, the airline is looking into the possibility of additional food flights to keep UK supermarket shelves stocked.

D-ALFH is one of two Boeing 777Fs to have been delivered to Lufthansa this year. The aircraft, called Namaste India, is one of nine 777Fs at the airline and has an age of just 0.4 years. It had been due to depart from Germany’s aviation capital at 12:30. However, it didn’t eventually get airborne until over an hour later, at 13:34. The flights arrived in Doncaster at 13:49.

Why is Lufthansa flying food to the UK?

Lufthansa is flying food to the United Kingdom to try and alleviate forecast shortfalls. While countries such as Germany had exempted freight flights from their travel bans, France did not. As such, both the Channel Tunnel and ferries to and from Dover were suspended in both directions.

This led to thousands of lorry drivers getting stranded in the United Kingdom, with even more drivers unable to get to the UK. Those unable to drive to the UK were unable to deliver their cargo.

Many lorries stranded in the United Kingdom were directed to Manston Airport in Kent. The airport closed its doors to planes in May 2014. It has since been designated as a parking site for lorries in the case of delays caused by Brexit, meaning it was well prepared for the latest chaos.

However, plans are underway to reactivate Manston Airport as a cargo hub for London. The UK Government gave the airport consent to reopen in July. The airport currently plans to welcome planes once more from 2023 onwards.