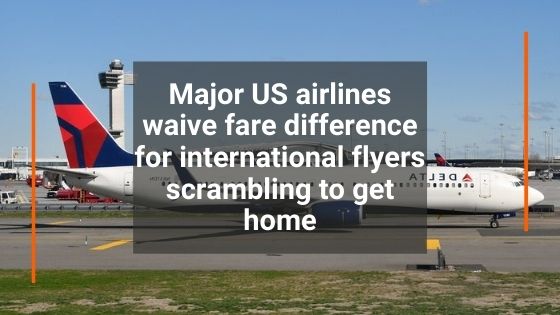 TRAVELING DURING THE PANDEMIC? BE SURE TO PACK SOME EXTRA FLEXIBILITY.

On Tuesday, the Centers for Disease Control announced that all international travelers to the U.S., including citizens, will be required to show proof of a negative COVID test taken within three days of departure.

With the new rule going into effect on Jan. 26, some flyers are likely scrambling to get home, for fear of getting stranded abroad due to poor testing infrastructure or limited capacity.

To that end, the ‘Big 3’ U.S. airlines will waive both the change fee and fare difference for international travelers looking to get back to the country immediately.

All three carriers have issued a temporary fare difference waiver for travel from all international destinations to the U.S. For tickets purchased on or before Jan. 12 with travel through Feb. 9, American and Delta will allow flyers to change to any other flight before the new testing requirement kicks in.

United’s policy is a bit more generous. The carrier’s waiver includes international tickets originally purchased on or before Jan. 12, 2021, for scheduled travel to the U.S. through Feb. 15.

It remains to be seen if other U.S. carriers will follow suit, but if history is any indication, it won’t be long before we hear from the others.

Even if others don’t match, making a last-minute change likely won’t cost nearly as much as it would’ve before the pandemic.

Every major U.S. airline has permanently dropped change fees, including most international tickets, so flyers won’t have to worry about the pesky $200 or more charge when making modifications.

You’re still on the hook for a possible fare difference, but with airfares at historic lows, making changes these days shouldn’t break the bank.