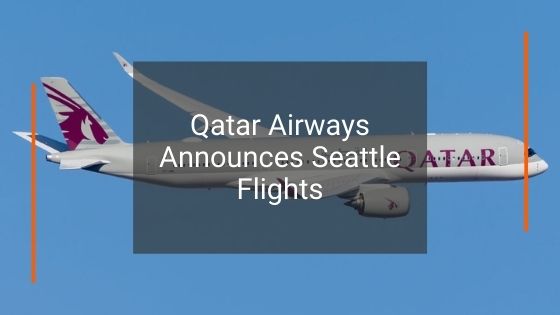 Qatar Airways has today revealed that its next North American destination will see it flying to Seattle. The flights will launch in March to tie in with Alaska Airlines joining the Oneworld alliance.

At one point, it seemed almost inevitable that Qatar Airways would leave the Oneworld alliance following internal disputes. However, since then, the relationship appears to have improved significantly, with new agreements even being forged with American Airlines, one of the airlines that seemed to spark the row. Now, Qatar Airways is increasing its Oneworld tie in with a new Alaska Airlines codeshare.

From March 15th, Qatar Airways will begin flights to Seattle four times per week. The launch of such flights will complement Alaska Airlines’ new Oneworld membership. Additionally, Seattle becomes the second new US destination to have been launched by the airline so far this year and its seventh new destination globally.

An Airbus A350-900 will operate the route on Monday, Tuesday, Wednesday, and Friday. It has been scheduled as follows:

As a single rotation takes over 24 hours, the airline will require at least two A350-900s to operate the route.

We won’t have to wait too long to see the first results of this announcement go live. Indeed, in just one week from December 15th, Qatar Airways will launch a frequent flier partnership with Alaska Airlines.

The partnership will mean that Qatar Airways Privilege Club members and Alaska Mileage Plan members will each earn miles on the other airline’s flights. From March 31st, the tie-up will increase to allow frequent flier point redemptions, in addition to status benefits. For example, if an Alaska Airlines passenger has lounge access through status, they will be able to use this on Qatar Airways.

But wait, there’s even more news. With the launch of Qatar’s Seattle flights in March, it will give passengers the perfect opportunity to change to and from Alaska Airline’s network. The airline will be launching a codeshare agreement with Alaska, although the exact details are still to be finalized.

“Qatar Airways is committed to enhancing connectivity within the U.S. market, and the launch of flights to Seattle, our second new U.S. destination since the onset of the pandemic, epitomises this commitment. We are excited to welcome Washington State’s largest city as our seventh new destination announced this year, and our eleventh U.S. gateway.”