Southwest To Receive Over $1.7bn In Government Support 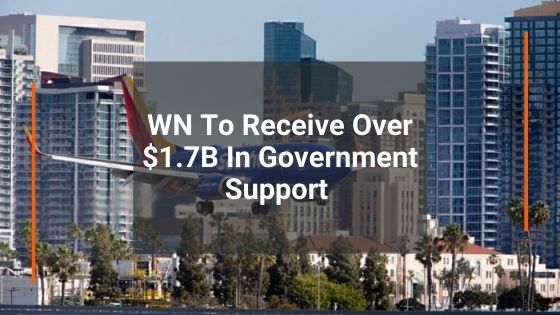 SOUTHWEST AIRLINES WILL RECEIVE OVER $1.7 BILLION THANKS TO THE LATEST EXTENSION OF INDUSTRY PAYROLL SUPPORT. THE AIRLINE RECEIVED THE FIRST FUNDS UNDER THIS ON JANUARY 15TH. THIS COMES AFTER THE AIRLINE WARNED ABOUT FURLOUGHS BEFORE THE US GOVERNMENT PASSED A SECOND ROUND OF SUPPORT.

Southwest Airlines reached a final agreement with the United States Department of Treasury on the second round of funds for employee salaries, wages, and benefits, through March 31st, 2021. The carrier expects to receive a total of $1,727,370,400 (~$1.73 billion) under the second round of support.

Southwest Airlines will provide the Treasury Department with a promissory note of $488,211,120 and warrants to purchase up to 1,054,907 shares of Southwest’s common stock under the terms of the PSP extension.

On January 15th, Southwest already received $863,685,200 (~$864 million) under the funding. This is about 50% of the total amount Southwest anticipates receiving. Delta Air Lines is another carrier that has also received government support under this second round.

In early December, Southwest Airlines warned of the potential for over 6,000 job cuts. This came after a strong Thanksgiving, but carriers still faced a bleak future as passenger numbers declined. Alaska Airlines, for example, outlined how, even amid the holiday season, the airline’s passenger numbers actually declined from November to December and October to November.

Even as Southwest began selling its flights to capacity, the decline in revenue was significant enough to warrant concerns over involuntary furloughs or layoffs. Southwest Airlines also lost out on about $100 million in revenue due to blocking middle seats.

Previously, Southwest Airlines was one of the few airlines that did not have to immediately furlough thousands of employees when the first round of industry support ran out at the end of September.

What the outlook suggests

For now, the outlook is that Southwest Airlines will have to endure some tough times before things improve. New and growing travel restrictions across the country have restricted travel to some of Southwest’s largest markets – including California.

While demand is still strong for flights to sun destinations like the Florida beaches and the Grand Canyon, many other points remain relatively weak. Southwest has to comply with DOT service requirements, though the current Southwest schedules likely meet the DOT’s minimum service requirements.

In addition, the airline is also not flying a full pre-crisis schedule. While it is adding new points to its route network, the carrier’s schedules are still pretty light since fewer people are traveling. Expect further schedule adjustments as the airline continues to tweak its operations to minimize losses.

For now, the money will definitely help the airline out, though it will need to continue to monitor its operations and financials to prepare for an uncertain 2021 ahead.