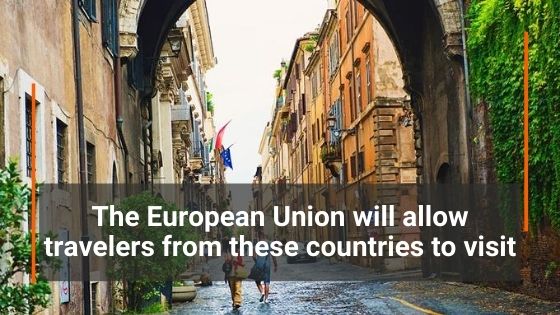 THE EUROPEAN UNION HAS UPDATED ITS LIST OF THIRD COUNTRIES WHOSE CITIZENS ARE ALLOWED TO TRAVEL TO THE BLOC AND ONCE AGAIN COUNTRIES GRAPPLING TO CONTROL THE PANDEMIC HAVE BEEN OMITTED, INCLUDING THE US AND BRAZIL.

EU officials have updated the list of countries for which travel restrictions should be lifted as from August 8, and it includes countries with similar or lower levels of infection as EU countries, and where the response to the pandemic is relatively robust. The list of approved countries is made up of Australia, Canada, Georgia, Japan, New Zealand, Rwanda, South Korea, Thailand, Tunisia, and Uruguay.

The EU has had a broad travel ban in place since mid-March on countries outside its territory. But since June travel restrictions have begun to ease in places where the coronavirus situation has improved as member states gradually opened their borders to each other ahead of the summer tourism season. On June 30, the recommended list of countries for which member states should lift travel bans was first applied.

The list is monitored and reviewed every two weeks as the situation is constantly changing worldwide. The first safe list was updated on July 16, and the second was updated on July 30. Initially, Serbia, Algeria, and Montenegro had made the cut but recent spikes in infection rates have seen these countries removed.

European travel may be off the cards for US tourists this year ©theendup/Shutterstock
With the latest recommendations, China will be considered too if it lifts its reciprocal travel ban on EU countries. And while the UK has left the EU, its citizens are allowed to travel within the bloc as EU travelers during the Brexit transition period.

The travel ban does make some allowances for travelers with “an essential function or need.” This includes health care professionals, diplomats, seasonal agricultural workers, and “third-country nationals traveling for the purpose of the study.” US travelers are also allowed to fly to Ireland and the UK as both lies outside of the Schengen Area, Europe’s free movement zone, but they must quarantine for 14 days upon arrival.

Ultimately the decision on who can visit their country is down to each member state as recommendations are not mandatory. Some countries, such as Croatia are allowing citizens from some non-EU states to travel there, including those arriving from the US.