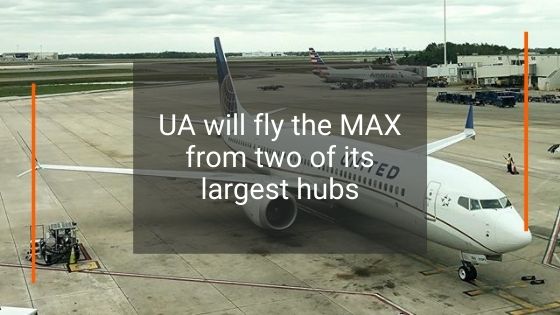 THE CHICAGO-BASED CARRIER PLANS TO RESUME FLIGHTS WITH ITS 737 MAX 9 JETS AT ITS DENVER (DEN) AND HOUSTON BUSH INTERCONTINENTAL (IAH) HUBS IN THE FIRST QUARTER OF 2021, UNITED TOLD STAFF IN AN UPDATE ON ITS MAX PLANS EARLIER IN NOVEMBER. THE AIRLINE FLEW 14 MAXES PRIOR TO THE MARCH 2019 GROUNDING.

The U.S. Federal Aviation Administration re-certified the 737 MAX on Nov. 18 after the longest grounding of a commercial passenger aircraft since the McDonnell Douglas DC-10 in 1979. The regulator is requiring a number of software updates and new training for pilots before airlines can resume passenger flights.

Flyer confidence in the MAX is one of the big questions airlines face as they prepare to return it to passenger service. A recent survey by Southwest Airlines found as many as 25% of travelers are uncomfortable flying on the jet even after the FAA’s review and required updates to the plane’s systems.

Some have suggested that Boeing and airlines embark on a confidence-boosting ad campaign for the jet to calm worried flyers. To date, no such campaign — nor one to drop the “MAX” brand — has been unveiled.

“I think people need to get on the plane and experience it,” Southwest President Tom Nealon said in response to media questions over traveler confidence during a MAX briefing on Nov. 19.

According to United’s website, it will “communicate in advance” that a flight is operated on a MAX to all flyers booked on the jet. In addition, it will change or refund all tickets on MAX flights with no fee at the request of travelers.

After American and United, Alaska Airlines plans to begin MAX flights in March following the delivery of its first jet in January. Southwest plans to resume MAX passenger flights in the second quarter, or as early as April.

The few available details of United’s MAX return-to-service plan suggest a focus on the airline’s coronavirus pandemic strengths. Both its Denver and Houston hubs have recovered faster than others on its route map. In addition, as some of United’s largest operations today, travelers uncomfortable flying on the Boeing jet will have additional flexibility if they decide to change their travel plans.

The carrier’s tentative plans to base the MAX in Denver and Houston breaks somewhat from its pre-grounding schedule. In March 2019, United flew the jets almost exclusively from Houston as well as on select flights to Hawaii from its Los Angeles (LAX) and San Francisco (SFO) hubs, according to Cirium schedules.

However, Denver and Houston are two points of strength for United during the crisis. In December, the carrier’s schedule will be nearly 72% of 2019 in Denver and more than 57% in Houston, Cirium shows. This is better than its system schedule of 53% of last year.

United will fly less than half of its 2019 schedules in Los Angeles and San Francisco in December.