United Goes Big And Bold With Seven Changes To The Airline 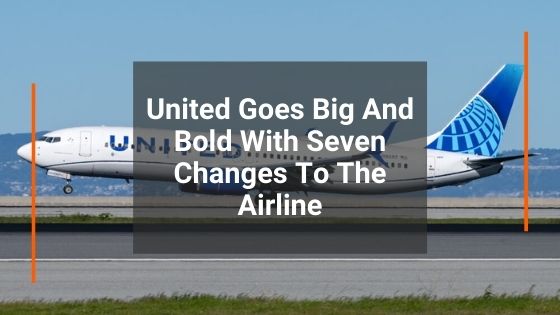 UNITED AIRLINES IS GOING BIG AND BOLD WITH SEVEN NEW CHANGES TO THE AIRLINE. THE CARRIER IS PROMOTING SEVEN AREAS OF FOCUS FOR THE “NEW UNITED.” THE CHANGES ARE DESIGNED TO TRANSFORM THE AIRLINE FOR A POST-CRISIS WORLD, WHICH WILL BE IN 2023 OR BEYOND.

Number one: changing how customers feel about United

Mr. Kirby’s first and foremost area of change was in how customers feel about United. Elaborating on this, Mr. Kirby stated the following on the airline’s fourth-quarter earnings call:

“We’ve made early down payments on this as the first among global U.S. airlines to permanently eliminate change fee. And the differences in the experience and interaction with our employees are what have led to the 30-plus point increase in [Net Promoter Scores]”

United Airlines suffered damage to its reputation in the aftermath of the Dr. David Dao incident. Since then, the carrier has made strides toward improving its image amongst its customers and potential customers, but this push shows just how important it is to Mr. Kirby that United Airlines puts its best foot forward in a bid to attract new customers both now and in the future.

United Airlines has already committed to becoming 100% green. The airline has plans to emit zero greenhouse gases by 2050. One of the big things United highlighted was its investment in biofuels and direct carbon capture technology.

On the call, Mr. Kirby stated that United would focus on the world’s largest direct air capture and sequestration project. He stated the following:

“United was proud to announce that we would be a launch partner, along with Occidental and 1PointFive, in the world’s largest direct air capture and sequestration project, where each plant will remove enough carbon directly from the atmosphere and permanently buried underground each year to be the equivalent of literally planting 40 million trees per year.”

The United States faced a reckoning last summer over a long history of racial disparities, and the same extends to the airline industry. White men dominate much of the industry’s boardrooms and executive suites, but United wants to change this.

Mr. Kirby did not offer much beyond the airline would be making some substantive announcements in the weeks to come. The airline industry could use and welcome more diversity, so stay tuned with what United has to offer.

Mr. Kirby explicitly stated the following in relation to innovation

“Innovation has driven our relative success during the pandemic, and it will be a hallmark of United in the future. We’ve changed our culture to be willing to have robust debate even amidst this incredible uncertainty, but we force ourselves to end each meeting with an actual decision and then move rapidly to get it implemented. And we have, by far, the best and fastest digital team of any airline in the world. If you look at the changes we’ve made early and throughout the crisis to our customer-facing app or the new technology we’re testing in airports or the COVID testing capabilities that we’re making available for customers, there’s simply no question that United has leapfrogged the rest of the aviation industry.”

Truly, United Airlines has focused on being innovative, but its innovation appears to be in customer-centric decisions. People like a more digitized travel experience. People like making travel easier after years of new security measures and airline policies that can seem cumbersome to navigate.

United’s former CEO faced a lot of strong criticism for how he described the mood of passengers by the time they got on a United plane. Let alone the fact that, at the time, United faced some issues over spotty WiFi connectivity and seats that economy class passengers were not a fan of amid shrinking legroom.

Mr. Kirby is definitely looking to do something beyond that. The airline likely will not be going out and adding legroom on its planes. Still, it will definitely try and make the travel experience better by focusing on making some aspects easier.

United’s balance sheet suffered as a result of the crisis. So, it is now focused on restoring the balance sheet. In that respect, Mr. Kirby stated:

“It’s clear that our view that we had an appropriately conservative balance sheet coming into the crisis was just wrong.”

“As we return to profitability, another primary goal is to restore the strength of our balance sheet. This means maintaining sufficient liquidity, reducing debt and unencumbering assets. This crisis has afforded us a number of valuable lessons about the balance sheet and capital allocation. Before COVID, we modeled our worst-case scenarios based on the financial impact of 9/11, followed by a recession. It turns out we weren’t even close. Going forward, we will focus on being ready for sustained destruction of global air travel demand like we are seeing today.”

This may result in some changes to the airline travel experience, such as perhaps some cost-cutting maneuvers, some higher fares on routes where United can get a premium. Still, most of these changes will be in the background of United’s operations.

Mr. Kirby stated that United Airlines would be permanently reducing its cost structure by a whopping $2 billion per year. His goal is to get the airline’s cost per available seat mile (CASM) flat into 2023, which will help the airline boost its profits, assuming its revenue can outpace its costs.

Cost reductions can come by reducing employee salaries, cutting down on the number of employees, and buying out or ending some leases, or paying off loans.

From a passenger experience, the airline could make its meal service more efficient, which would be a permanent change that would reduce United’s catering costs. This, however, it could likely not do if its competitors outpace it in terms of meal services.

But, much like number five, this is something that passengers may not explicitly feel on their travels with United.

The airline is confident that, by 2023, at the latest, the airline will get to EBITDA (earnings before interest, taxes, depreciation, and amortization) will exceed 2019 levels.

Essentially, based on the pace of demand recovery, the airline believes that a combination of growing passenger numbers and permanent cost structure reductions, it will hit a point where it will beat out its 2019 results. Of course, this is not a guarantee, but the airline’s executives seemed pretty confident it could happen.

This mostly has to do with revenue, so the airline may end up trying to stimulate demand with low fares or else charge a premium now that the international market has reduced capacity and competition.

This last point is mostly a mix of confidence in returning consumer confidence and confidence in United’s ability to get people to choose it when they need to fly. However, how United works to get a competitive advantage in 2022 and beyond is a strategy that will unfold as time passes.