Vaccine Rollout Could Be the Fastest Way to Reignite Travel 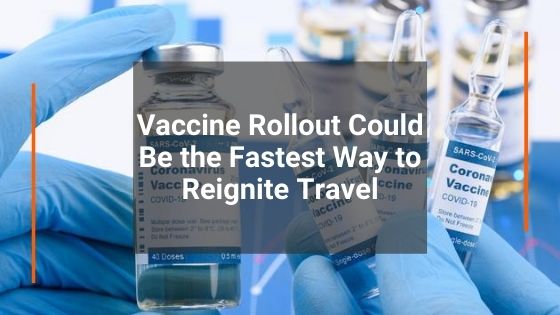 GETTING VACCINES OUT TO AMERICANS MAY BE THE FASTEST WAY TO REIGNITE THE TRAVEL INDUSTRY. A NEW SURVEY HAS REVEALED THAT ACCORDING TO ITS LATEST TRACKING STUDY OF AMERICAN TRAVELERS, 70 PERCENT OF THOSE SURVEYED INDICATED VACCINES WILL IMPACT THEIR TRAVEL DECISIONS.

Before vaccines began rolling out, a November study showed that 77 percent said they were changing their travel plans because of COVID-19. Now, as vaccines become more available, that percentage has steadily declined to 68 percent in the most recent survey.

“The arrival of coronavirus vaccines is a game-changer for future travel in the U.S.”, said Amir Eylon, president and CEO of Longwoods International. “We expect the pace of the travel industry recovery to be directly linked to speed that vaccinations drive down cases, hospitalizations, and deaths from the pandemic.”

Americans are also becoming more comfortable traveling outside of their communities. Thirty-nine percent of Americans were comfortable in mid-November. That number rose to 46 percent in mid-January.

Communities are also more willing to open up to visitors. Thirty-two percent of those surveyed supported opening up their communities to visitors in mid-November. That support has increased to 41 percent.