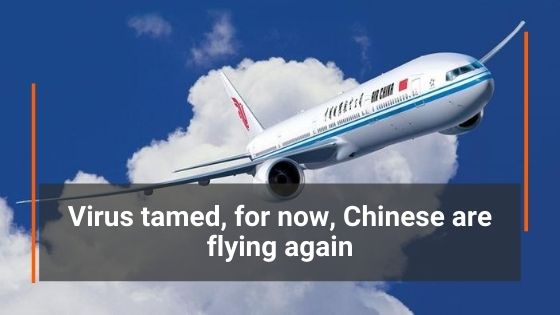 International travel to and from China remains deeply depressed, due mostly to strict restrictions on international arrivals that the Chinese government has in place. But the story in the domestic market is quite different.

ForwardKeys attributed that recovery most notably to China getting the Covid-19 pandemic under control. The virus originated in China’s Hubei province late last year and daily confirmed cases were often above 3,000 in February. But since March the daily case count has rarely risen above 200.

According to the World Health Organization, the country of 1.4 billion has confirmed no more than 180 new cases during any day in August, with the daily count having ranged below 100 for more than two weeks. The low numbers led to the resumption of group tours within China in mid-July.

Helping to boost demand in the coming weeks will be a spate of travel by the school and university students ahead of the upcoming fall terms, ForwardKeys said. In addition, airlines are boosting demand with aggressive price promotions.

With China’s domestic air market typically the second largest in the world behind the U.S., the recovery could offer lessons here, where throughput at U.S. airports was down 70.6% year over year last week.

The first and obvious solution for the U.S., said ForwardKeys spokesman David Tarsh, is to eliminate the virus. Once that happens, confidence in air travel can follow.